Wish everyday could be holiday 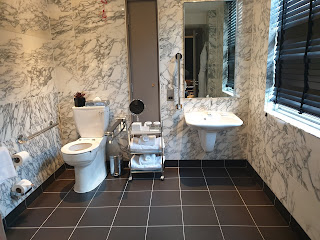 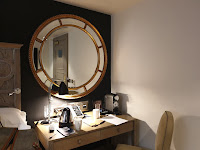 It really does feel ages since I was in a lovely routine with life . I have really had such a surreal few weeks. These are some pictures of the hotel bathroom we stopped in, I am a little disappointed that I didn't take more photos but I was so busy trying to take it all in. The hotel was simply amazing the bathroom had been done so lovely,  I have been in so many so called accessible bathrooms where the only thing they had actually done was put a plastic hand rail in.
I appreciate that all disabilities have different needs but one of the things that really annoys me is when people think we don't deserve it to look nice too. This bathroom was just gorgeous plenty of room for the wheelchair the large sink at a useable height.
The grab rails and handrails made of chrome not your discoloured white.
The shower curtains clean and a beautiful shower seat that if I had wanted to use I could of done.
I am obviously home now and hope i can remember everything i want to record. One of the things I did notice is my sense of direction is appalling and my ability to find my own way has disappeared. I really need to rework on this. I think it may be because the last few years when I was trying to walk I could only do it holding onto someone and with 100% concentration I couldnt look where I was going or concentrate on anything but staying upright.  Then when I was in my other chair I was pushed around somewhere during this time I have lost the skill of being aware of my surroundings and finding my own way around.
I was so bad Charlotte had to keep saying to be me stay in front mum so I can see you. This was hilarious as that is what I used to say to her as a toddler.
We did attempt the underground which for me was very very scary, we couldnt actually get on the tube because of the gap between platform and tube. We could of asked for assistance with ramps etc but we chose to walk and use the buses.
I am going to rethink my blog of london as I am tempted to put so much in and it may well get boring which would be a shame. I am well aware that at the minute I am still so very tired and trying to do so much and nothing very well . I might take a leaf out of my Bulldogs book and snuggle and sleep and just maybe have a little snack or two.
Posted by Amanda at 16:20 No comments:

I am so so excited I can't believe the last couple of weeks they have just been so awesome. I haven't made time for writing my blog which is not good but as I say progress not perfection.

I have been worried about Clive and generally letting things get the better of me. I have never felt so special as I have this weekend. Everyone that I know have all spent time to make me feel a million dollars and I can't put into words how that has made me feel.
I spent last Tuesday and Wednesday preparing for my role of Slimming World Consultant hopefully to inspire my groups to hold onto their Christmas Wishes and achieve the weight losses they so deserve.
Um well things kinda didn't go to plan as I was a completely speechless when I got into group Wednesday it was all decorated for my Happy Birthday and cake

I am now 50 years young, I am embarking on an adventure which is both exciting and scary. I am determined not to let my nerves and panic spoil it though.
I haven't slept since Friday and it's now Monday morning, well of coarse I have slept a little bit here and there but I have been just so so excited.

I am currently sat on a train on my way to London have never been on a train in my wheels before. I have read lots of scary accounts on how hard it is to travel in wheels. So far so good arrived at Derby easy peasy met by the most smiley platform lady with the ramps which to be fair the ramps were nearly as big as her. Safely on the train heading into London inside my tummy keeps flipping over think it's called over excitement. Going to try and blog little bits and take lots of photos. I really love this new chair and my new confidence. 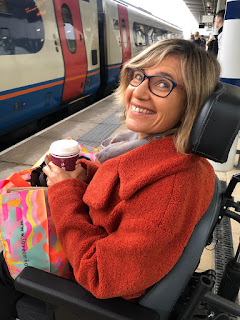 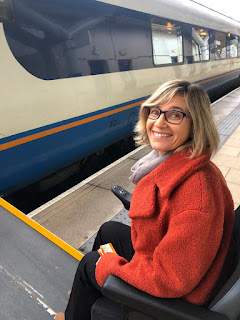 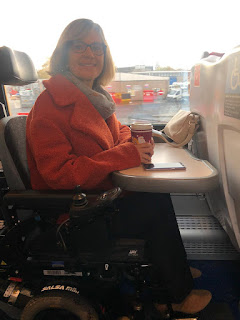